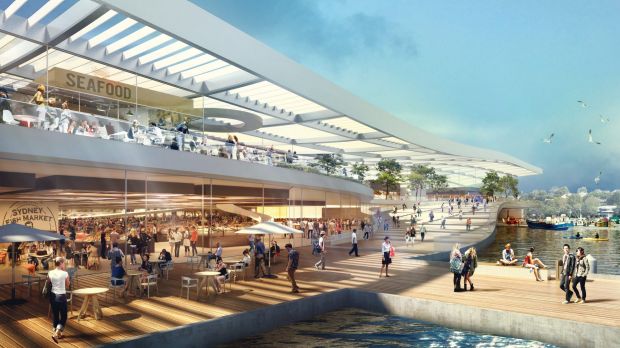 The NSW government has unveiled plans for a significant redesign of Blackwattle Bay, shifting the Sydney Fish Market to a new home, displacing heavy industry and opening new tracts of inner-city homes and shops.

The $250 million transformation, announced on Sunday by Premier Gladys Berejiklian, would house the fish market in a new Danish-designed building next to its current spot, backing onto Wentworth Park on the south side of the bay.

Ms Berejiklian said she hoped new use of the current site would pay for its redevelopment, costing taxpayers nothing.

But the proposal comes after a $549 million cost blowout to the Sydney light-rail construction, while plans to combat extra congestion from the new homes and shops remain under development.

The shake-up would also force concrete contractors Hymix and Hanson to shift from the area, which has been criticised for high pollution levels in the past.

"The Sydney Fish Market is an iconic part of our city but there's no doubt it needs a huge makeover," Ms Berejiklian said. "I know, with a makeover, there will be even more tourists and even more locals enjoying this."

Work on the site is set to begin in late 2018, with construction expected to be completed in two to three years. The new building will be designed by Danish designers 3XN Architects, which are behind Sydney's Quay Quarter Tower.

"At the moment we get 3 million visitors a year to the site and our modelling predicts that could go to 6 million," he said.

Barry Mann, head of the projects portfolio at UrbanGrowth NSW said the brief was "to create a world-class food and dining destination on the inner harbour that will be dynamic, sustainable, and sympathetic to the local area".

Standing on its current site since 1966, the Sydney Fish Market has been the subject of speculation for several years, with many investors reportedly interested in developing it.

The owners, Sydney Fish Market Pty Ltd, reported a $978,000 net profit after tax last financial year, down from $1.7 million the year before. The company spent several hundred thousand dollars in a legal dispute involving Robert Deans, a real estate developer who had had a rival vision for the market redevelopment.

You can share this story by using your social accounts: